I’m presenting here a compact, completely self contained vertical antenna that I have conceived,  designed and built recently. This antenna is primarily for portable operation on the 30 and 20 metre bands (although it could be easily adapted for other bands). Being a portable antenna, it had to tick a few boxes, as I intend using it on some planned VKFF park activations that will be taking me near salt water…

The inspiration for this antenna came after I came across this video from Peter, VK3YE back in 2015 on his most excellent YouTube channel. The construction details on his antenna were unfortunately rather brief, but used telescopic rabbit ear TV sections as his counterpoise, and a section of coil stock which he taps to bring the counterpoise to resonance against a quarter wave radiator. It’s wonderfully simple. Peter drew a diagram in the sand, but i’ll put one here…

Figure 1 shows the antenna. It consists of a 1/4 wave vertical radiator, with an Elevated, short counterpoise, that is tuned to resonance (think of it as the other half of a dipole with the 1/4 wave radiator) by adjusting the inductance of the ground tuning coil.

I just like to mention that I haven’t invented anything, but other than Peter’s video, I haven’t been able to find any concrete reference or practical examples to this kind of antenna on the internet. Peter mentions a page in Les Moxon’s “HF Antennas for all Locations” describing a short tuned counterpoise, but the second hand copy I hunted down (ISBN 0 900612 57 6) doesn’t have the same information. The diagram shown on page 186 in Peter’s version of the book in the video appears on page 157 in my copy. There is only a vague mention of the same concepts, nor is there any solid measurements or construction tips.

I have become reasonably adept at modelling and tweaking simple antennas in MMANA-GAL  Antenna modelling software. This is an excellent, free program that lets you visualise and design an antenna, and play with it to tweak its performance. I’m no expert, but after a short learning curve I’m able to do pretty much what I need to do reasonably quickly. So I drew the antenna thus… In figure 2, you can see the feed point – the red dot, the 1/4 wave radiator above it, and the  4 short counterpoise wires below. The ground tuning inductor isn’t shown, but is actually described in software. The wire I used as a radiator is just heavy duty grey plastic insulated wire. It has a velocity factor of about .93 so my 10.135 Mhz 1/4 wave is 6.875 metres long. The counterpoise “wires” –  actually 6mm aluminium tubing, are all 1.5 metres long. The lowest point of the antenna is at 1.00 metres from the ground, as this is the height bottom of the antenna stops when slid on to my portable mast mount.

Ok, so what about the short counterpoise? How do we tune the antenna to resonance? We know the radiating element is at a 1/4 wave for our band of interest – in this case 6.875 metres long. Let’s add a short wire between the feed point and our 4 counterpoise wires to add a coil to…

The red wire shown in the model is only 100mm long, but is used to define where we will put our coil to bring the 4 short radials to resonance. This is defined as Wire 2.

Now we have the antenna defined in the program, We need to tell it that we are feeding the Antenna at the bottom of Wire 1. This is in the table Sources 1 w1b. The inductor is defined in the Loads 1 table The coil is defined here as w2c – i.e the coil is in the centre of Wire 2 and has a value of 5 uH. ( This was initially 20uH…it was twaked to 5uH to get the SWR down)

So here we have the result. Here we can see that the antenna has a feedpoint impedance of close to 40 ohms resistive, 8 ohms reactive with a SWR of 1.33. (This result is after I tweaked the value of the inductor from about 20 uH to 5 uH) The base of the antenna (tuned ground radials) is at 1.00 above real ground.

Lets look at how the antenna is radiating RF according to the software, here are some plots…

This shows the gain of the antenna is about 1.00 dBi, and the maximum radiation is at around 26 degrees towards the horizon.

Now we have a model that says what I have envisaged, should, in theory, work!

The Main radiator is a 9 Metre Squid pole, this slips over a 42mm PVC extension that slides into the top of the ALDI bike repair stand I’m using as a tripod. The top and bottom coil supports are cut and drilled from Nylon cutting board. The 4 radials below the coil attach to the triangular aluminium plate on the bottom coil support. The bottom of the coil is connected here, and the top of the coil is connected right at the earth connection of the SO239 socket on the top coil support. The Coil is soft aluminium craft wire, readily available from ebay. It’s easily formed into a coil and is slightly “springy”. There is a nylon clamp on the top coil support that allows the top support to move up or down, thus stretching or compressing the coil, to tune the antenna to resonance. The clamp secures it when the adjustment is completed. The 1/4 wave wire attaches to the centre conductor of the SO239 socket, and is loosely wound up the squid pole mast and secured. There is a common mode choke just below the feed point, it’s 17 turns of the coax through a single FT240-52 toroid. (shown here as RG174, since changed to RG58)

So what does our trusty nanoVNA tell us? After adjusting the length of the coil this is what the 30M band looks like…The antenna seems to be doing exactly what it should. Feed point resistance is 47.7 ohms, there is 1.36 nanofarads of capacitive reactance and the SWR is 1:1.26 .have to be happy with that…

I also experimented with a 20 metre band radiator, and added a shorting clip to shunt out some inductance to bring it resonance on 14.075…Here our SWR is 1:1.19…so its working here as well… 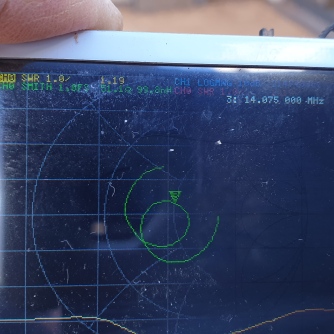 So how does it work on the air? It’s early days, and I had it set up very close to my house and fence, but the path to my east was clear and it certainly seems to get out. Some good DX to El Salvador and Guatemala on 30 metres FT8 was worked in the first few hours on the air…I easily worked the USA as well on both 20 and 30 metres. (all East of me)

I’ll set this Vertical up in the clear on my block away from buildings in the next couple of days and see how well (or not) it works compared to my reference antenna. I’m hoping the low take off angle will allow me to work the more distant stations my reference antenna seems to struggle with.  I’ll update here when I’ve had more time to judge it’s performance.

I hope the information presented here is of interest to some. I really enjoy modeling and building antennas, but I’m pretty green! I’ll readily admit to not understanding many aspects of RF and I have no idea how efficient this antenna is, my ground losses, etc etc. I guess it’s all about learning and experimenting. I welcome any comments or criticism, please feel free to contact me if you would like any more details on what I’ve described here…

Very happy with the antenna, I worked 100 countries in 7 weeks, pretty good going at solar minimum!

One thought on “A Tuned Counterpoise Vertical for 30 and 20M –”